Xiaomi’s new sub-brand, Pocophone, brings an interesting proposition. The brand’s very first smartphone, the Pocophone F1, comes with hardware you’d expect to find on flagship devices, but the base model retails at only RM1,299 – that’s a fraction of what premium phones normally go for.

That being said, there are a couple of reasons why the Pocophone F1 is so affordable, but that doesn’t take away the fact that it has incredible value for money.

Let’s start with hardware. The Pocophone F1 is powered by Qualcomm’s most powerful chipset yet, the Snapdragon 845, a 6.18-inch 1080p IPS display, 6GB of RAM, 64GB or 128GB of internal storage (further expandable with a microSD card), and a generous 4,000mAh battery.

Rounding out the specifications of the Pocophone F1 are a 12MP f/1.9 + 5MP f/2.0 dual camera system, a 20MP front-facing shooter, and a slightly modified MIUI 9.6 software – specifically tuned for the F1 – based on Android 8.1 Oreo out of the box. 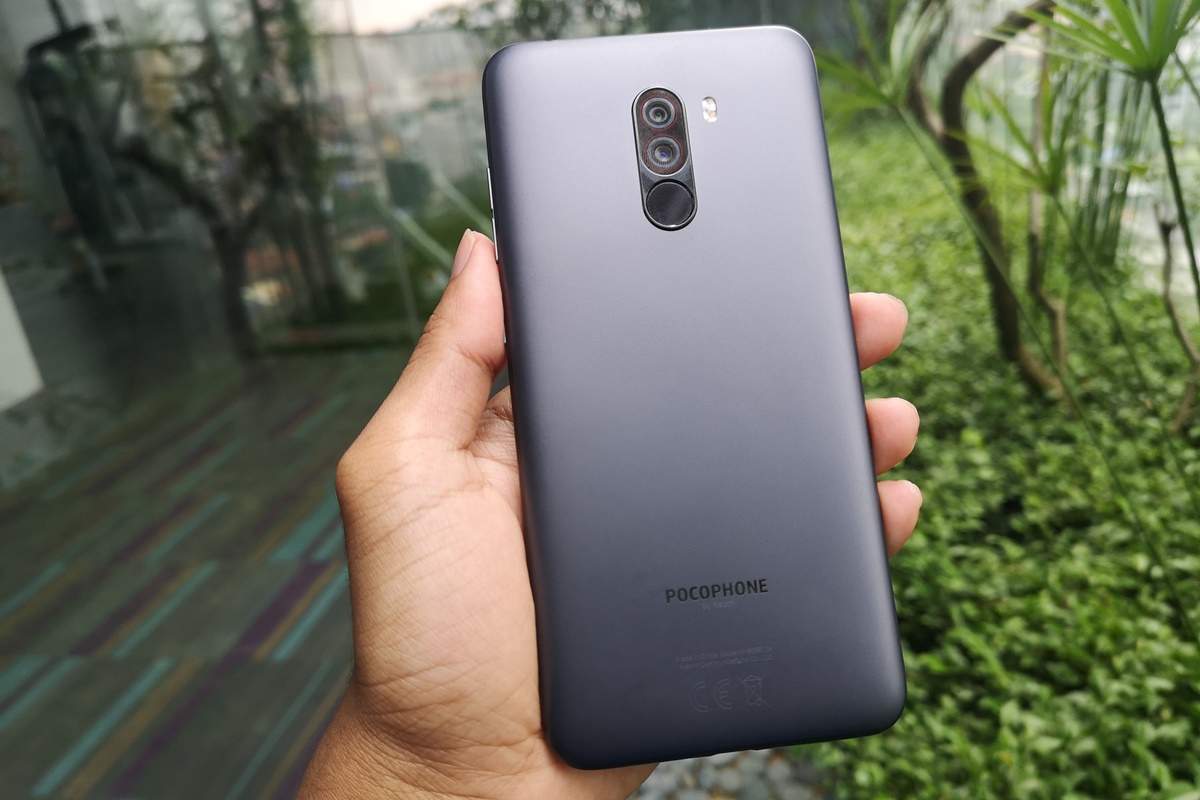 Without a doubt the Pocophone F1 has a very respectable spec sheet, but how does it feel to hold? Pretty darn good, actually. Its polycarbonate body has a nice matte finish that hides fingerprints well, and the slightly tapered back panel makes it a comfortable device to hold for long periods of time.

Of course, the polycarbonate chassis doesn’t feel quite as premium as a glass and metal construction found in other flagship phones, but this is a sub-RM1,500 smartphone – it’s a compromise I’ll take any day of the week.

Like most phones in the market now, the Pocophone F1’s 1080p IPS display has a notch, and it’s quite sizeable. Thankfully, you can “hide” the notch in the settings – the area surrounding the notch will be darkened if you opt to hide it. personally, I don’t mind the notch at all, and it doesn’t interfere in normal day-to-day usage. 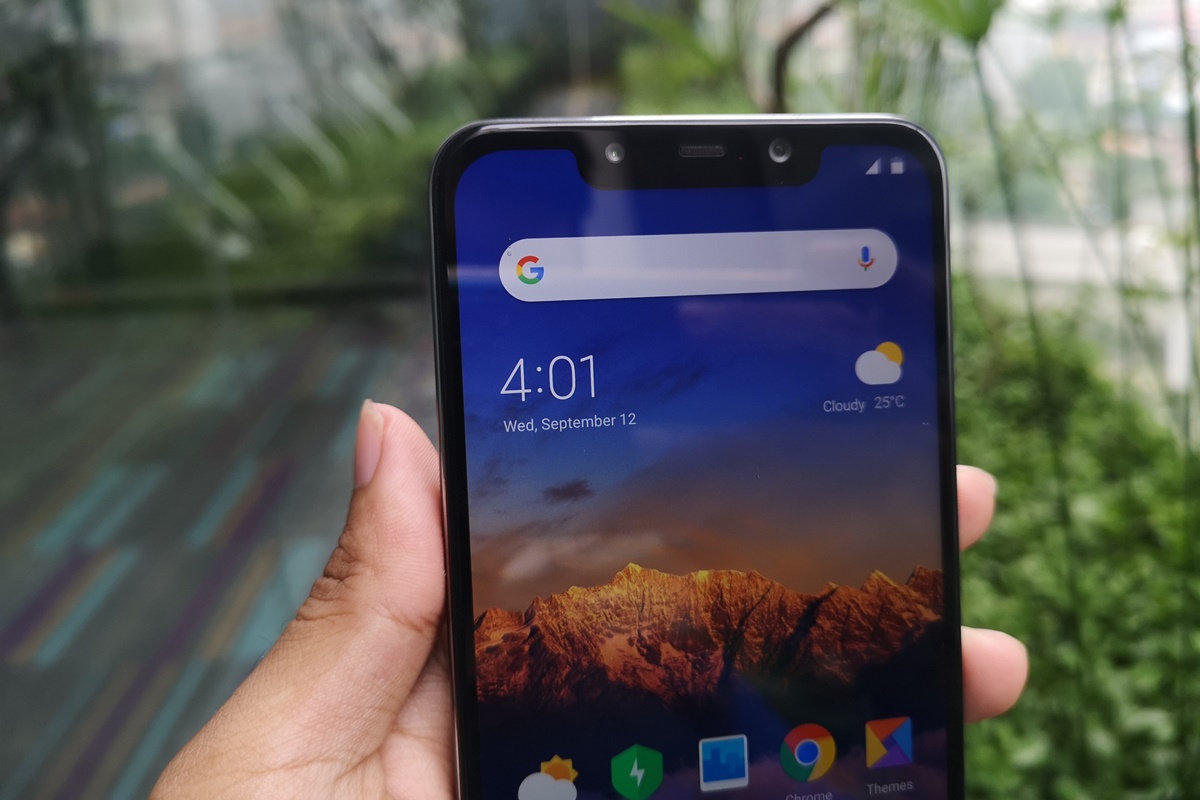 As for the display itself, it looks quite stunning for a smartphone in this price range. It can get really bright, colours are vibrant, viewing angles are good, and it’s plenty sharp despite the 1080p resolution of the display. Sure, a higher resolution screen may look nicer, but this will affect the phone’s battery life – not exactly a sacrifice many are willing to make.

Speaking of which, the Pocophone F1’s huge 4,000mAh battery should return very good battery life. Despite packing such a large cell, the F1 doesn’t feel all that heavy either. Tipping the scales at only 180g, it weighs about the same as, say, the Huawei P20 Pro. On top of that, the F1’s chassis measures 8.8mm – not too thin or thick.

Oh, it’s also worth noting that the phone supports Qualcomm’s Quick Charge 3.0 technology. Unlike most Xiaomi smartphones, a compatible charger is bundled in the box too – very nice. 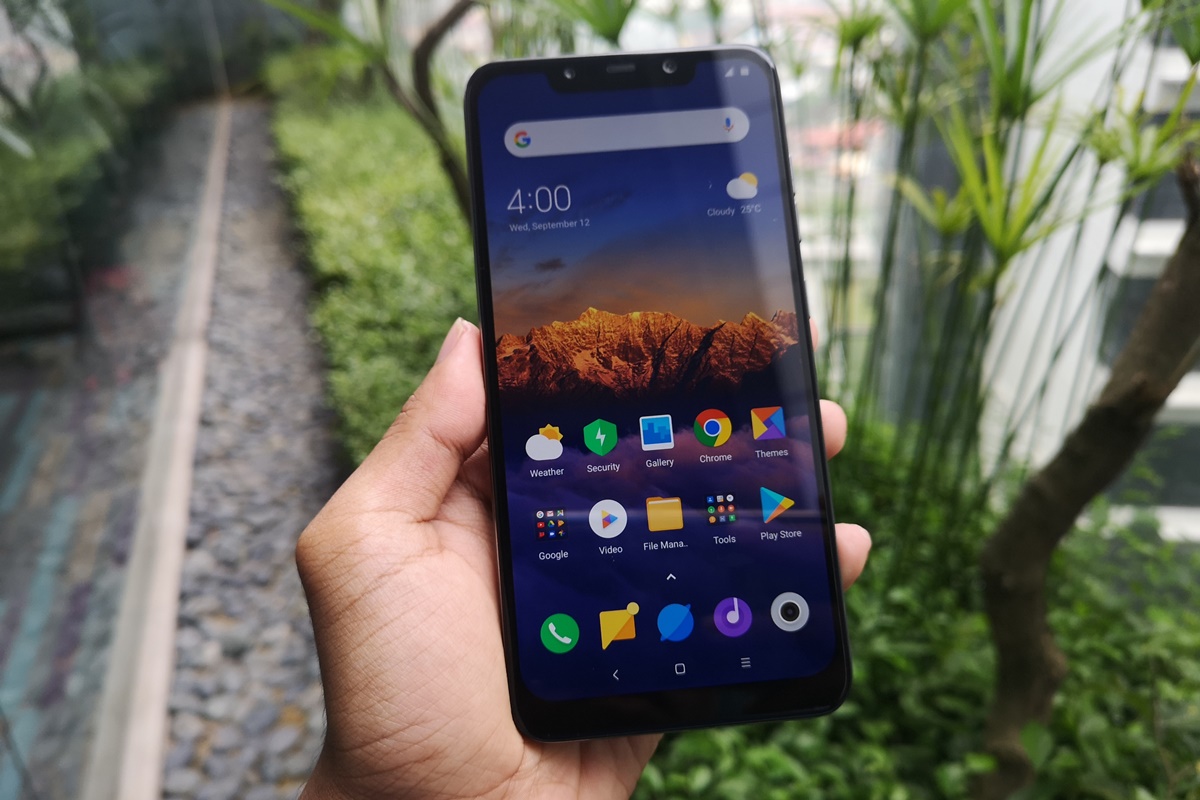 What about software experience? Running on a slightly modified version of Xiaomi’s MIUI 9.6, the Pocophone F1’s software looks and feels a lot like what you get with a Xiaomi phone. However, there is one distinct difference: it has an app drawer, which can be accessed by swiping up on the home screen. Apps are grouped into different categories automatically in the app drawer as well, making it easier to find certain apps.

When it comes to security, the Pocophone F1 has a rear fingerprint sensor and face unlock. Both methods can unlock the phone very quickly, and the face unlock feature – thanks to the front-facing infrared sensor – will work even in the dark.

And then we have perhaps the best reason to get the Pocophone F1: performance. Running on a Snapdragon 845 chipset, the F1 – perhaps as its name suggests – is a very, very fast smartphone. It’s an absolute joy to game on this phone, and I can switch between different apps seamlessly. Considering the fact that the F1 can be purchased from as low as RM1,299, this level of performance is practically unheard of in this price range.

But the Mi 8 does have the upper hand in a couple of areas. It sports a more premium build, it has a better Super AMOLED display, and its camera performance is without a doubt superior. However, if all you care about is getting the best performance for the least amount of money, the Pocophone F1 trumps the Mi 8. 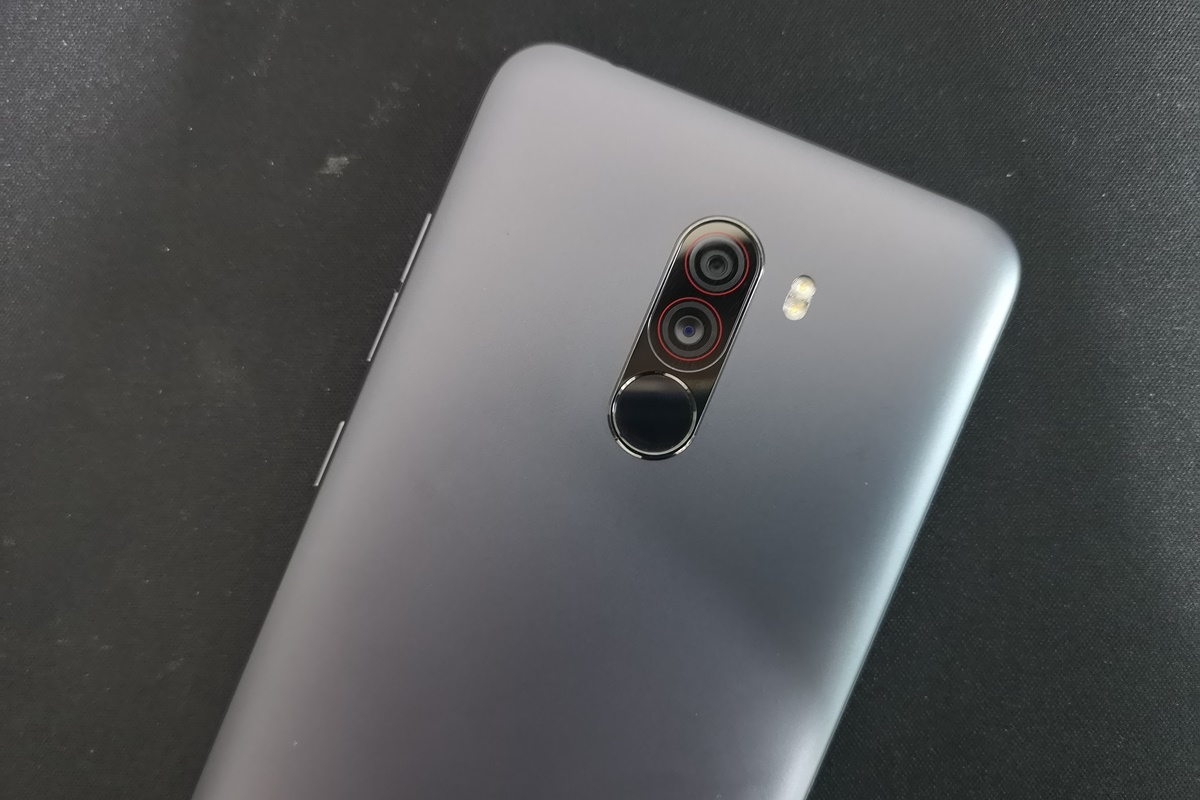 Right, I haven’t touched on the camera performance of the Pocophone F1. In most cases, budget-friendly smartphones…don’t have the best camera performance. Surprisingly enough, that doesn’t apply to the F1 – for the most part.

The F1’s dual 12MP and 5MP cameras are quite capable, and you can capture good-looking shots without much difficulty. The autofocus is fast, there’s no noticeable shutter lag, and white balance is kept in check pretty well too. However, its dynamic range isn’t quite as wide, and images does look soft in certain conditions.

I haven’t got the chance to try out the F1’s camera performance extensively in low light conditions, but based on a few shots I took, it seems pretty capable. Even though the shutter speed slows down quite a bit in low light environments, images still look flattering with good exposure. 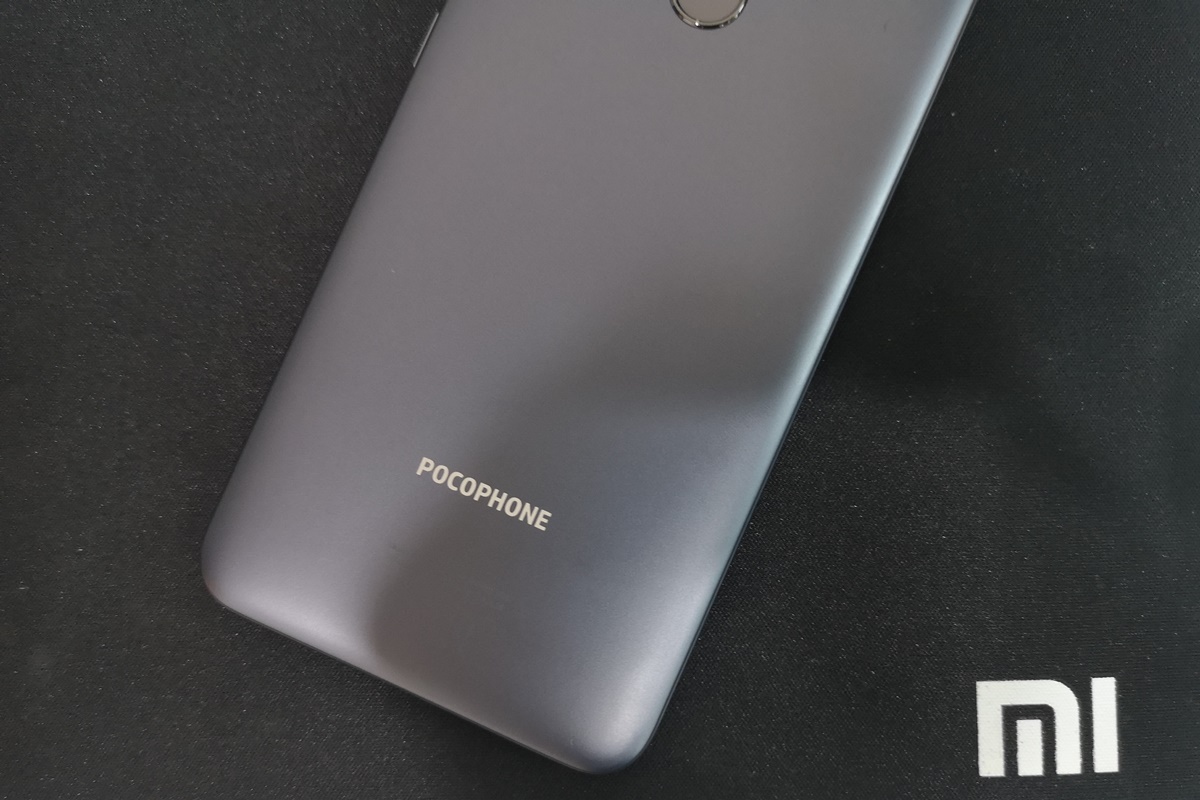 The Pocophone F1 really redefines what you can expect from an affordable flagship smartphone, and it also exceeds expectations for devices in this price range. Never has there been a smartphone as powerful as the F1 in the sub-RM1,500 price range, and I’d argue the RM1,299 64GB variant of the phone is the best phone you can get on a tight budget – you can always add more storage with a microSD card.

However, is the Pocophone F1 as good as a flagship smartphone twice – or even thrice – its asking price? Of course not. Its build quality, camera performance, and overall polish still isn’t comparable to a “proper” flagship smartphone. But as I’ve mentioned before, if you want the absolute best performance from a smartphone with the least amount of money, the Pocophone F1 should be at the top of your list.

Call of Duty: Warzone Is an Accessible, Beginner-Friendly Battle Royale